The governor of Guerrero, Evelyn Salgado Pineda, led a meeting in which it caused controversy that a Mexican flag with the modified shield was painted on one of the walls: the snake making a curve similar to that of an "S".

The use of the modified flag provoked intense reactions on social networks. Among the comments, they accused the governor of having modified the national shield with the intention that the snake will be in the form of an "S", the first letter of her last name and that of her father, senator, Félix Salgado Macedonio. They also accused her of to be violating the Law on the Coat of Arms, the Flag and the National Anthem.

Until now, it has been unknown when that flag was painted with that shield in the hall of the 27th Infantry Battalion of Iguala and if that alteration has to do with the surname of the governor and her father.

The truth is that the placement and shape of the snake on the shield of the flag painted in the hall of the military installations does not correspond to any of the 11 flags that have been officially recognized in the country.

But what do the laws say about modifying the National Symbols?

What the Law says about the National Coat of Arms, Flag and Anthem

In its second article, the LAW ON THE NATIONAL COAT OF ARMS, FLAG AND ANTHEM establishes: 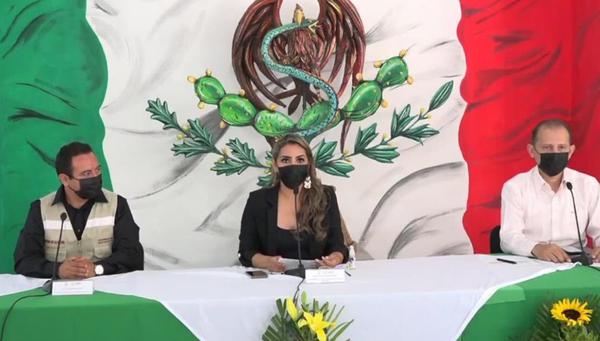 “The National Shield is constituted by a Mexican eagle, with the left profile exposed, the upper part of the wings at a level higher than the plume and slightly deployed in a combat attitude; with the support plumage down touching the tail and the tail feathers in a natural fan. Posing his left claw on a flowered nopal that is born in a rock that emerges from a lake, he holds with his right and with his beak, in an attitude of devouring, a curved snake, so that it harmonizes with the whole. Several cactus stalks branch at the sides. Two branches, one of oak in front of the eagle and another of laurel on the opposite side, form a lower semicircle between them and are joined by means of a ribbon divided into three stripes that, when the National Shield is represented in natural colors, correspond to those of the National Flag”.

In its fifth article it specifies:

“All reproduction of the National Shield must faithfully correspond to the model referred to in Article 2o. of this Law, which may not be varied or altered under any circumstance”.

Fines and up to years in jail

In addition, the Federal Penal Code speaks of sanctions in its articles 191 and 192:

Article 191 Anyone who violates the coat of arms of the Republic or the national flag, whether by word or deed, will be subject to six months to four years in prison or a fine of fifty to three thousand pesos or both sanctions, in the judgment of a judge. .

Article 192 Anyone who makes improper use of the national coat of arms, insignia or anthem will be sentenced to three days to one year in prison and a fine of twenty-five to one thousand pesos.

Read also: They track a thousand million pesos diverted in the Mancera government

Summer and swimming pools: how to avoid risks with the little ones